(deutsche Version) So today I’m about to fly back to Berlin with Turkish Airlines, the highly vaunted and considered as best airline in Europe by Skytrax. Travel began hours before take off with the first disillusion: When I checked punctuality of the incoming flight TK 40 from Istanbul this morning, I found out the machine would be late for about 4,5 hours, which meant I’d miss my connecting flight to Istanbul. Actually I would have made it with 3-hour buffer, but already at this point, the airline revealed a new schedule for TK 41. Later, I delightedly realized that the given time (7:47 AM) would even fall short, so I caught the connecting flight comfortably.

I reached the airport of Kapstadt at 1:30 PM and entered the Terminal at 1:45 PM, after submitting rental car at Avis. The Turkish Airlines counter was placed in the central Check-in Area, just a few meters away from security control. I was received pleasant by a female “flight controller” (a description I never read before) and got my boarding tickets. I had reserved the seats before, which can be done 90 days ahead for long distance flights and 7 days for short distances at the travel agency of your trust. Furthermore I was indicated the machine would be late, but there would be no problems with my connecting flight at 8:30 AM the morning after. 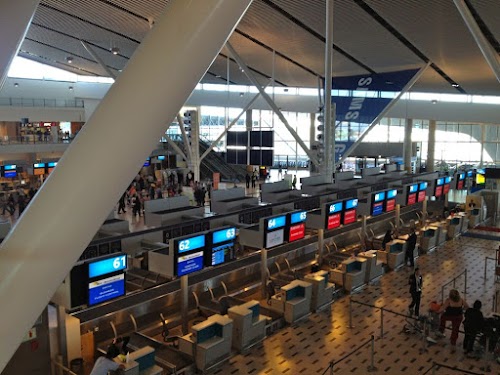 After that I swiftly went through the empty security and passport control, disturbing an immigration-officer, which was sleeping in his control box. He was so tired, he passed away two times while checking my passport. I finally reach the premium lounge at 2 PM, which was used by Turkish Airlines in Kapstadt.

Obviously the premium lounge is a facility of a public bank. Numerous airlines like KLM, Emirates and Turkish Airlines use it. But I was amazed that SAA, which is part of Start Alliance just like TK, conducts one of its International Flagship Lounges in Kapstadt. At my arrival, the lounge, which is located at the west end, was almost empty, so I took place at a bigger seating groups with sight on the tough down point. The machine arrival, today succeeding from the west, was in perfect view. Besides a little but fine selection of South African dishes, which were hallal as well as vegetarian, the lounge offered lots of South African wines, beer and soft drinks and famous Apple- and Grapetiser. It also disposed of showers, fast Wifi for free and a smoking room, which is usually hard to find nowadays.

Time passing by the lounge filled up to the max, since the guests of Emirates 777 to Dubai were granted access, too. I left the lounge at around 5:15 PM after a pleasant stay.

Immediately after arriving at Gate 4, the call for boarding occurred and so I got into the Airbus 330-300 through door 2. I was received in a nice way and directed to my seat. 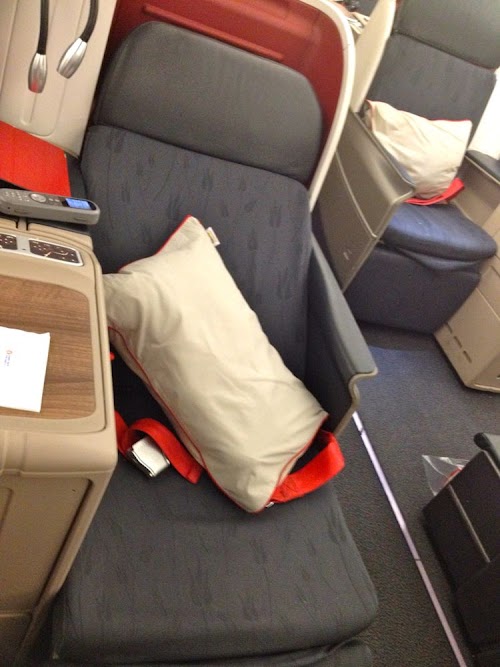 Getting there I found a comfortable blueish cabin, which could have been a little cleaner but all in all it was alright. A few minutes later orange juice, water and Champaign were served. I chose Champaign, which turned out to be a “Gosset Brut Grand Reserve”. At this point I had the feeling that this noble glas of Champaign was a bit too warm. Unfortunately this and next ones were even warmer. This could be explained by the cooling of red and white wines and the Champaign together.

Turkish Airlines serves the route Istanbul – Johanisburg – Kapstadt with a mix of Airbus 340-300, 330-200 and 330-300, while in the last months they rather used the A330-300, which is the most modern and newest airplane, according to Fluglogs. The machine with the registration number TCJ-JMN and the name “Samsun” belongs to a fleet of actual 10 of those modern aircrafts that come with 28 Business Class bed seats of the newest generation in the comfortable economy class. They are ordered in a 2-2-2 configuration. 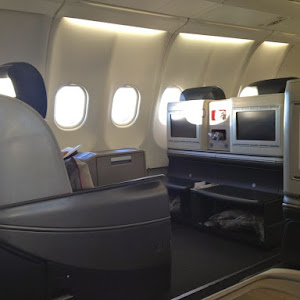 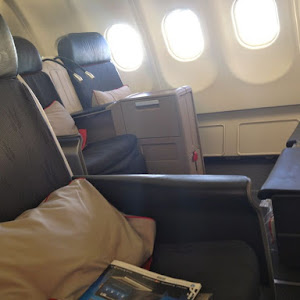 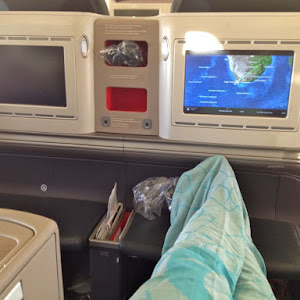 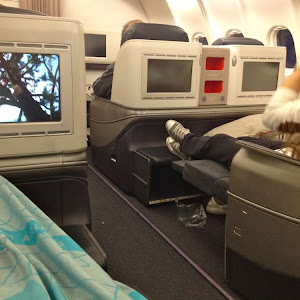 Respectively 5 of those are placed at the window front, while the seats in the middle are just available in row 1 to 4 and placed a little in the back, since there is also the 1C/E bar. With that you have an attractive configuration, because passengers do not have to sit in parallel and enjoy an additional amount of privacy. I profited directly from that on seat 2E in the middle block. The seat has a banking angle of 177 degrees and therewith is able to resist the famous 3-degree inclination of the fuselage, what surprisingly works very well. Even though the seat-control does only work with control buttons (flat and take off/landing) takes a little time to get used to, I can give it a good mark after around 14 hours. Furthermore the power supply (which works well with adapter for german and US plugs) strikes positively. Same is the space of the ottoman, armrest that can be converted into a sight protection with reading light plus the presence of two pillows per passenger. Well Done Turkish Airlines!

Again, I can only report positively about this. Almost 200 TV programs and movies, delivered by the AVOD system, are hardly manageable. The only downer is the difficult navigation, but you can see at least 10 of the latest cinema movies in several languages. Last but not least there are numerous games and the (billable) text message function that should not remain unmentioned. In total I’ve seen three very amusing top cinema movies, which left no wish of quality unfulfilled. After searching a little bit, you find a high-class moving map and two cameras. Every passenger has the chance to enjoy the entertainment program with a noice cancelling headset, which I haven’t used because I got my own Bose Quiet Comfort 3 headset. 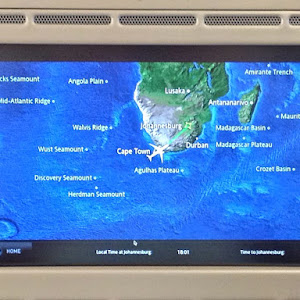 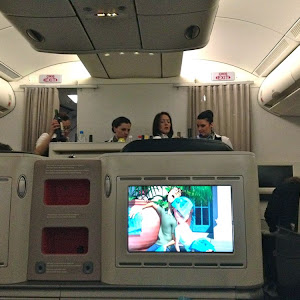 Already in Kapstadt every seat got a pair of fluffy slippers, but there were no amenities given out. After boarding took place in Johanisburg, the amenity kit followed with socks, tooth brush and paste, body lotion, lip balm and a comb. These amenities together with the products in the bathroom, could convince and prove that not all the airlines are as spare as Swiss, a few days ago.

Like in so many times there are two sides, because even though the excellent hardware, the service was not convincing serving with up to 4 stewards and a cook. Generally, service seemed uncoordinated and desultory. Filling up empty glassed or offering snacks, beverages etc. did NOT happen independently. This leads to heavy usage of the service button in order to be served by one of the rushing employees. Once you receive the attention, every wish is being fulfilled immediately but completely without any emotion. As already mentioned, the cabin looked like a hive, because especially between Kapstadt and Johannesburg, Dishes, foods and utensils were move from kitchen 1 of the business class to kitchen 2, what was quite disturbing. I also want to hint the fact that with Do&Co not a normal airlines caterer, but the Austrian-Turkish star caterer was responsible for catering. Therefore, Do&Co sent a cook on board of long distance flights just for heating up and serving the dishes at the right time. If the service was so and so, the snack was disappointing, even though the cook served it from Kapstadt to Johannesburg without any comment to me. 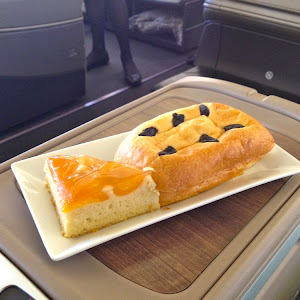 The snack was about a sadly looking crunchy roll with smoked salmon and a too dry piece of apricot-almond cake. I washed it down with a moderately cooled glass of Champaign and orange juice. Shortly before landing, I ordered another glass of Champaign, which was given out in a plastic cup and had room temperature, due to landing approach! Therewith, the good Champaign was totally messed up now.
After landing in Johannesburg, the passengers were informed about staying in the airplane for a whole hour. This can be explained by the fact that Turkish Airlines owns no “5th freedom” and therewith cannot gather further passengers for the route JNB-CPT. And so the airplane was cleaned and the travel could continue after only 50 minutes. Notably, the IFE was put off while approaching the parking position and then put on again after a restart.

After leaving the gate at around 9 P.M., the appealing and personalized menus were handed out and nuts were served with an Aperitif of choice. I decided for the Turkish white wine “Prestige Narince 2012” from the region Kapadokien, which couldn’t fulfill its promise of strong Barrique-flavor at all. As Aperitif alright, but as determined many times, the production should be left to countries that are well known for it. About 80 minutes after take off and from my point of view a little late, the starters were served from a trolley. 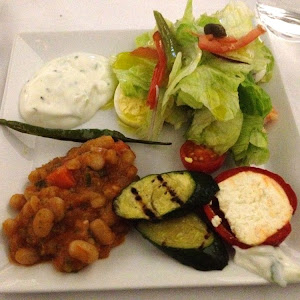 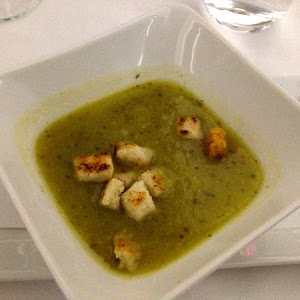 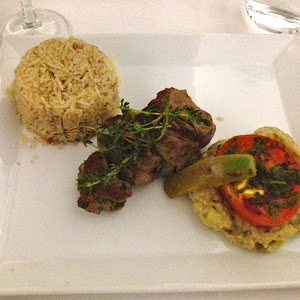 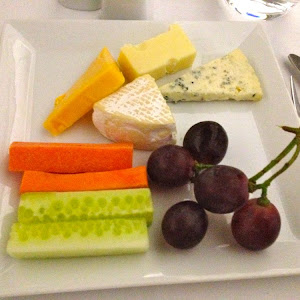 The six delicacies of the Turkish kitchen were convincing, even though I had to waive the roasted chicken breast. Well, maybe they wanted to leave some room for the soup that portrayed itself as a type of courgette with croutons.

Unfortunately, the main course took a lot of time and so I was able to eat the “lamb from skewer with grilled tomato-paprika and mashed eggplant and rice” just two hours after take off. I was reimbursed with juicy meat and excellent mashed eggplants. Certainly my wish at order to leave the rice away was ignored. I tried not get upset since I didn’t had to eat the rice, which I then did after all, not resisting my resolution to eat low carb. The main course was accompanied by a flat wine (“Bodegas Beronia Crianza 2008”) from the region of Rioja. A little time later, the dessert trolley with a selection of cheese, which I tried, apple tart and chocolate-cheese cake and blueberry ice cream started up. The cheese was pasteurized and compared to the rest of the food rather mediocre. The ordered port wine to the cheese didn’t arrive, as well as a nice to see sweet dessert. Too much alcohol isn’t good anyways and after TK seduced me to eat carbs, I wanted to save the calories.
After dinner, I slept for about 6 hours and woke up 80 minutes before landing. The already filled out order form for breakfast seemed to only have an informational character, since no food was offered to me at no point of time. Really sad, since I would have loved to try some, but probably Turkish Airlines thought that I needed some room for breakfast on the connecting flight.

We finally reached the airport Attatürk in Istanbul at 7:25 A.M., 20 minutes before the predicted landing time. Based on our delayed arrival, there was no available parking, so we had to stay on the apron. Unfortunately no bus was reserved for business class guests, which is the case at most of the airlines and I cannot understand it. After approaching the terminal, well signed out ways and a quick check of the hand luggage, I reached it at 7:50 A.M. Because my connecting flight was dispatched from gate 201, I went for the 10 minute way to the gate and reached it at around 8 o’clock on time.

The following connecting flight TK 1721 was done with an Airbus A320. The rather eventless flight scored with great service and an excellent Do&CO catering. I think the pictures speak for themselves. 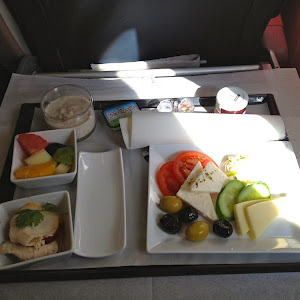 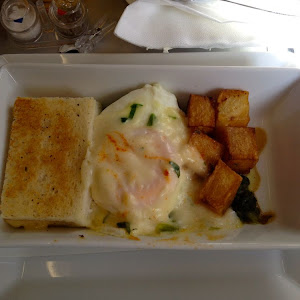 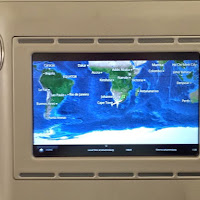 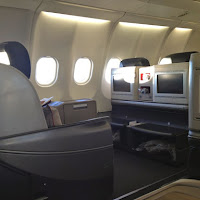 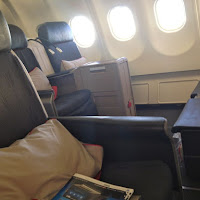 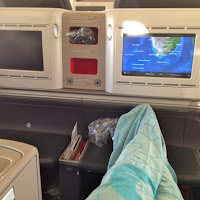 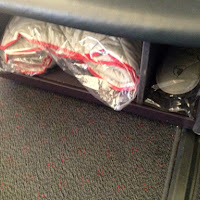 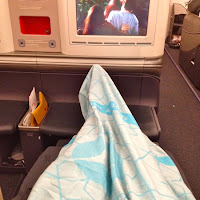 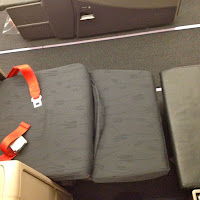 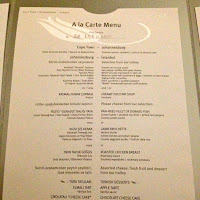 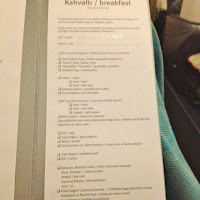 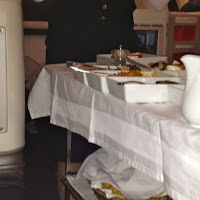 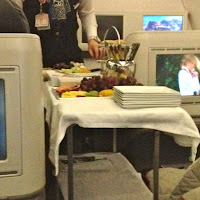 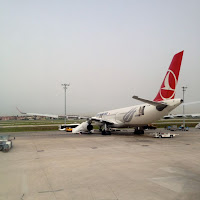