Recently, I went a lot with British Airways First Class, but on Friday, I took Swiss Air First Class to New York. Compared to the changeover in London, Zurich has the advantage of giving me more time for sleeping and eating, since there flight duration is longer. Especially on return flight this I not so unimportant, because this time It took 6,5 hours.

I checked in, well I tried to, at the Lufthansa counter, which processes Check-In for LH and Star Alliance in Tegel. But because a few guests checked in before me, I used the empty queue at the Business Class counter round the corner. The lady was friendly and Check-In uncomplicated, but there is not too much to it that could go wrong. There was no advice to visit the lounge (not even where to find it). I didn’t matter so much to me, but I think for it’s not so nice for new ones. My luggage got priority bagtags and I got the boarding ticket.

As usual in Tegel, passengers in First Class use the senator lounge by Lufthansa. You are offered a nice breakfast, good service and Coke instead of Pepsi. Who knows me, knows why.  WLAN is now for free in all LH Lounges.

Since there was some fog in Zurich, the plane was late on time. We were told so, but also being sent out the lounge with a second announcement, which could have been avoided. The security personnel were not motivated at all and rather morose than friendly. But we entered another world, when boarding: Swiss friendliness, speaking to guests by name and courteous services in Business Class. Seat 1F is very comfortable, because no seat is placed in front of it. The aircraft was an Avro RJ100 Avroliner by Swiss air.

After landing in Zurich, the plane was parked close by, so we got fast into the terminal. The big advantage of First Class travelers is to get in the lounge via stairs before security control.
After being welcomed very pleasant by the ladies at the reception, I was offered to be taken by limousine. The lounge is spacious and offers a separate restaurant area and so called day rooms, besides possibilities to sit and work. More about the lounge can be read in an upcoming article.

Time passed by fast and so I was brought downstairs to a special security and passport check, and then by limousine to another terminal, where flight LX 014 was about to take off. I don’t really get, why I had to pass security control once again (since I couldn’t leave the limo anyway), but at least it went fast, thanks to the Fast Lane. 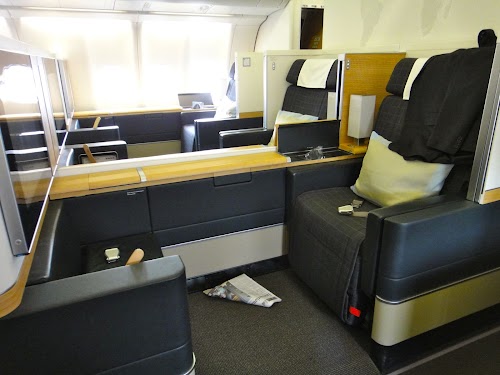 Boarding the airplane is also quite uncomplicated. On the right side, Business and First Class passenger board, Economy Class on the left.
When I got into the plane, I received a warm welcome and was asked, which beverage I would prefer. My wardrobe was taken care off, too. Little time later, the Purser introduced himself, we had a little small talk and I got a hot towel for refreshment. Even before take off followed a greeting from the kitchen, which was very tasty. 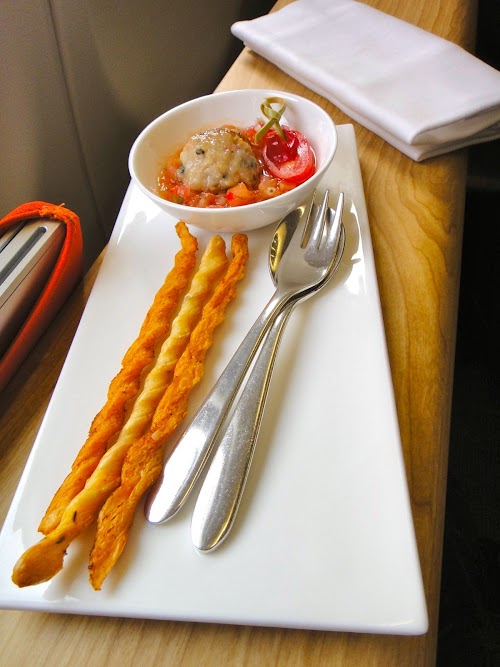 Then I received the nicely done Amenity Kit, as usual in a modest black, and pajamas by van Laack. As opposite to Lufthansa First Class, where you only receive a sweater for day flights and the bed isn’t done for you, this is no question for Swiss Air. You get pajamas, bedding with seating cover, blanket and pillows. If that’s too much for you, you can also get a thin coverlet. I made the same experience at British Airways. I reall don’t get, why Lufthansa doesn’t at least offer blankets for day flights.

Directly after take off and approaching the cruise altitude the menu was served, which didn’t only sound nice, but also was. I chose a mix of starters, including lox, a little of air dried meat (deer and others) and stewed artichoke-tatar. 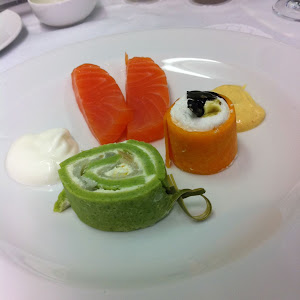 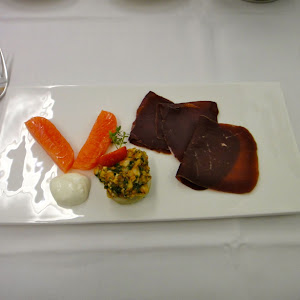 Then a rather uncommon combination follow: some kind of “Champagner-Sauerkraut-creamed-soup”, which was really, really good. Thereto we got dark and bright buns, olive oil, balsamic vinegar and butter. The dishes were developed in partly collaboration with star chef Andre Jaegers, who’s home is located in the region Schaffenhausen and who is priced with 19 Gault Millau points. 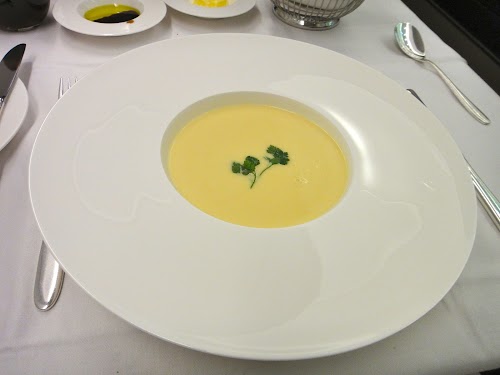 I decided for the main course “shortly fried deer medallion”. With the delicious deer gravy and the combination with cranberry compote the menu was rounded off. 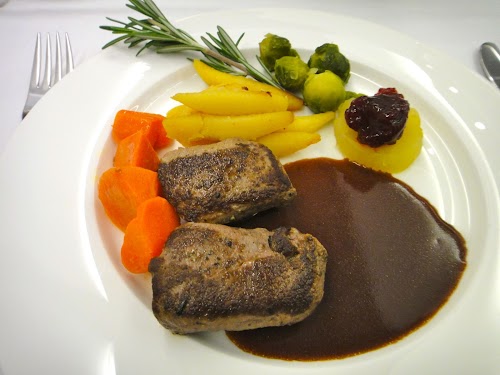 Appropriate to the single dishes, the passenger can choose between Champaign, three white wines (Switzerland, France, Italy) and three red ones. As dessert wine, a 2003 Sauternes or a Portuguese “Graham’s Tawny (20 years) port wine is offered. Furthermore, the list of beverages contained a variety of alcohol free soft drinks, a big selection of tea or Nespresso coffee and espresso specialties. 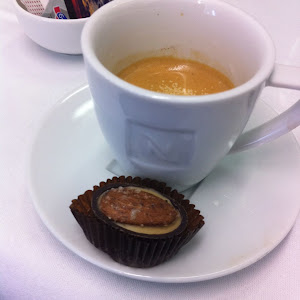 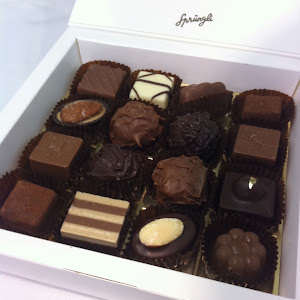 Who likes to enjoy an aperitif beforehand can choose between Sherry, Campari, Gin or Vodka from a big variety.

The new First Class seat is comfortable and big. With a length of 211cm and width of 56cm, the seat is also sufficient for bigger people. Thereto it comes with a touch screen remote and a couple of individual configurations, including a massage option. 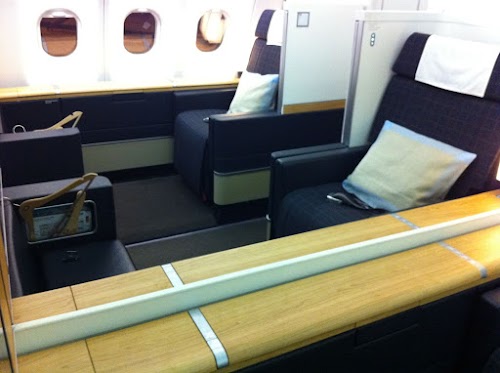 A big disadvantage is the huge table. On the one side it provides the possibility, to eat versus by two, but on the other side you are not able to get up, when the table is folded out. Unfortunately this means that everything has to be cleared away and after sitting down set again – not so sophisticated. 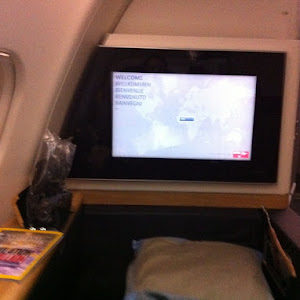 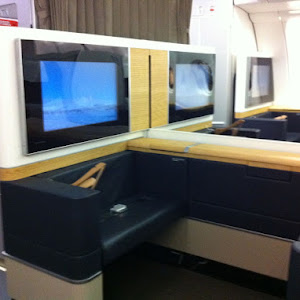 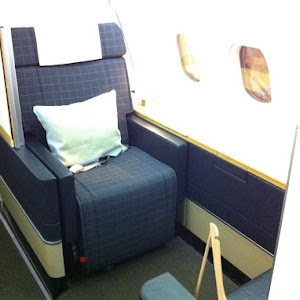 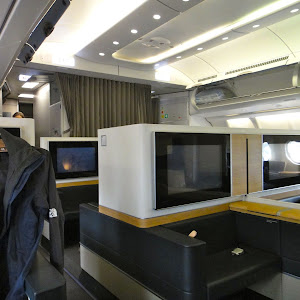 The size of the seats is recognized, when change to a 2,11m long bed. The batch makes the bed quite comfortable and offers a lot of space in order to have a restful sleep. The bedding feels very high-class. From my originally planned one hour of sleep (in order to work afterwards), it became four restful ones. All this without earplugs, since it’s quite silent in the cabin. 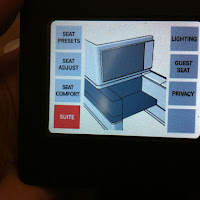 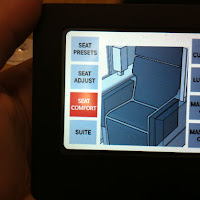 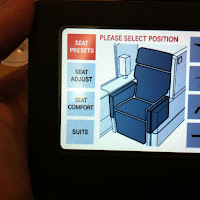 The necessary privacy is guaranteed by shifting a little wall on the right by the corridor. By doing so, you are isolated from the madding crowd. Between the seats in the middle, a wall is pulled up, too.

Here are some pictures of seat, food and the cabin. 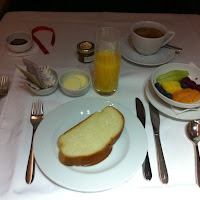 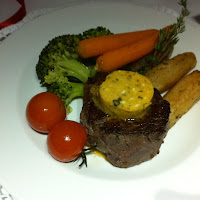 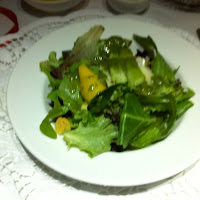 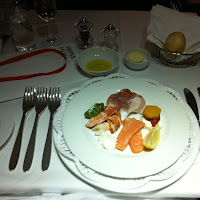 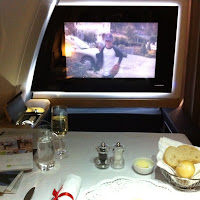 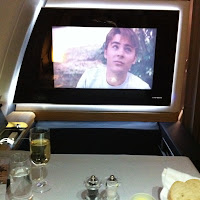 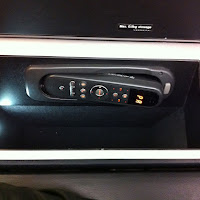 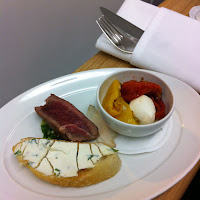 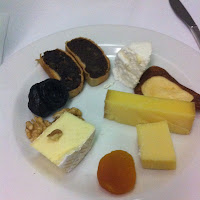 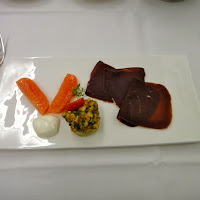 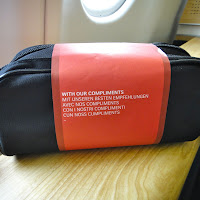